Berkeley sociologist Arlie Hochschild — author of the best-selling book Strangers in their Own Land: Anger and Mourning on the American Right — wrote her first book when she was nine years old. You could think of Colleen the Question Girl as a prequel to Strangers in their Own Land, which tries to make sense of why Trump supporters in Louisiana’s ‘cancer alley’ feel loyal to the oil companies who pollute their air and water, while despising the Environmental Protection Agency. 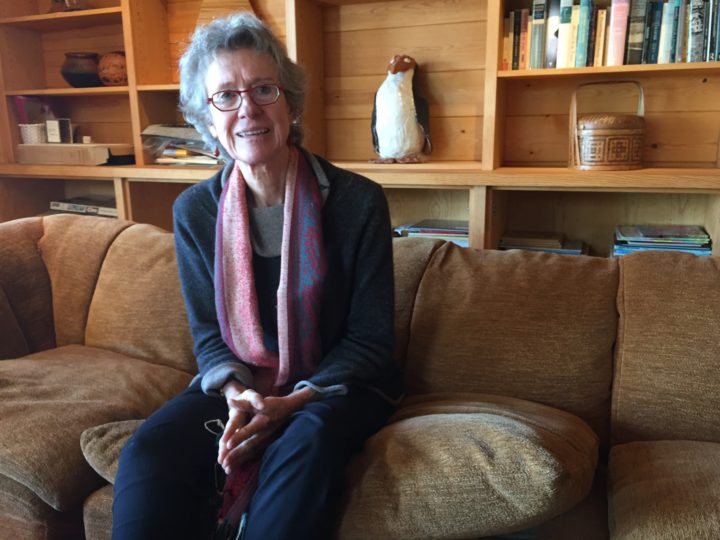 “Why don’t bears have horns?” “Why aren’t zebras plaid?” “Why are some houses so big and others so small?” Hochschild wrote in her first book. Even as a child — and Hochschild readily admits that Colleen was modeled after herself — she was asking difficult questions. “It was about a little girl who was trouble to the adults in her life,” she said. “She’s a little radical, and she was always trying to get her father’s attention.” Colleen starts out as a girl who asks too many questions but, eventually, she becomes the town’s question girl. “Question-asking spread all over town,” the young Hochschild wrote. “And over the years to come, questions flew out of Colleen’s dreams into a wind that blew all around the world.”

As it turns out, Colleen — first published in 1974 by the Feminist Press and now reprinted and available on Amazon — was prescient. Hochschild started teaching at the sociology department at UC Berkeley in the 1970s, at a time when there were precious few female sociologists. From the get-go, she started asking the kinds of questions that were not on her male colleague’s radar screen. Why is “women’s work” less valued than men’s work? What happens when traditional “women’s work” (such as childcare and elder care) is outsourced to strangers? And, more recently, how can blue-collar workers be so blind about billionaires?

Hochschild revels in these seemingly intractable questions. In between Colleen and Strangers in their Own Land, Hochschild wrote several other groundbreaking books, including The Second Shift, The Outsourced Self, The Managed Heart and The Commercialization of Intimate Life: Notes from Home and Work. But her latest book has been her most successful yet: it has spent time on the New York Times bestseller list, and was a finalist for the National Book Award. It has been so popular that it was unavailable for three weeks before Christmas because Amazon could not keep it in stock. (Hochschild is still irritated about that.) “I have written 10 articles since the book came out: I never imagined I’d be doing all this,” she said.

But timing is everything and, once again, Hochschild was prescient. “Five years ago, here in Berkeley, I began to sense a terrible divide,” she told a gathering at the Hillside Club recently. “Not because the left was becoming more left, but because the right was becoming more right.” Look at a Republican such as President Eisenhower, she said. “He was a great sponsor of public infrastructure. Reagan was for gun control. Goldwater’s wife was one of the founders of Planned Parenthood. Nixon brought us the Environmental Protection Agency. And now we hear that the nominee to head the EPA is a climate-change denier.”

In Louisiana, Hochschild — who sheepishly told her interviewees she came from “Bbbbbbb … Berkeley” — encountered true Southern hospitality. She was served lots of sweet tea and gumbo. She was invited to family dinners and community barbecues and was taken out for leisurely boat rides on the (highly polluted) bayou.Hochschild began the research with one of her trademark questions: “How is it that the poorest states in our country, with the worst levels of education, the worst health, the lowest life expectancy — and states that take more aid from the federal government than they give back in taxes — how is it these states revile the federal government? I didn’t understand.”

She was also called a “communist,” an “environmental wacko,” and a “femi-Nazi” by her subjects. “Luckily, they always laughed after they said that,” she recalled. But she added that, “people in Louisiana were also concerned about the divide. They felt they were a fly-over state, and that they were considered uneducated and wrong-headed and Southern and redneck. They were glad I came down to see who they really were.”

Louisiana was the poster child for this paradox: in 2004, Hochschild says, it was the poorest state in the union, and 44% of the state budget came from the federal government. “And they are very strongly Tea Party,” she said. “By the end of my journey, I discovered that they are enthusiastically for Donald Trump. For five years, I had been studying the dry kindling. When I went to New Orleans to see a Trump rally in 20016, I saw the match.”

Hochschild has always been interested in studying feelings and not just data, so it’s not surprising to hear her say that “we need to understand who the Trump supporters are, why that vote makes sense to them — without presuming they are deplorables.” The people Hochschild interviewed felt “culturally colonized [by liberal values] and marginalized. They felt like a minority group, that was unnamed and couldn’t — didn’t — want to name itself. They were victims, they felt, but couldn’t claim victimhood.”

They felt that Hillary Clinton’s economic and trade policies would push them further back, while Trump told them, “we’re’ making you great again, I am recognizing you, blue-collar people.” These communities felt looked down upon as a region but also as a social class. “There was a lot of despair and depression” among Trump supporters, Hochschild said, “and Trump was like an anti-depressant. He’s very good at drilling down for anxiety and deploying it. He said, ‘I will get you un-depressed.’”

But how can a billionaire from Queens understand the situation of blue-collar workers in Louisiana? “He’s been watching it out of the corner of his eye for 25 years,” Hochschild said. “He watched [George W.] Bush put on a cowboy hat and pretend to be a cowboy,” and he attempted a similar feat.

Democratic party policies, meanwhile, were not helpful to blue-collar workers, Hochschild said. “Raising the minimum wage does not help blue-collar workers,” she said. International trade agreements were not helpful to the people she interviewed, and government regulations sometimes made their lives more difficult rather than easier. “The Democratic Party has relied on Silicon Valley for support, but paradoxically many of the interventions that will come out of Silicon Valley will put blue-collar people out of work,” she said. She added that many public institutions actually benefit the middle class “a lot more than the poor.” In addition, she said, progressives don’t want to see that “some public things are not functioning well. Some regulations have gone haywire.” 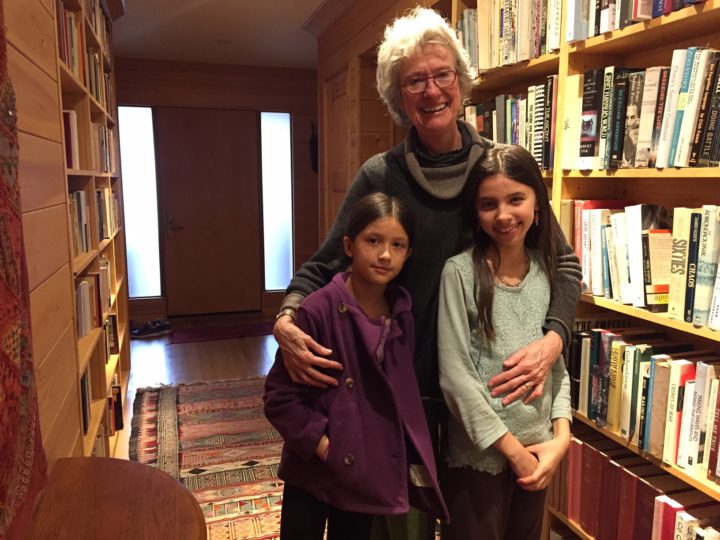 Arlie Hochschild and her husband Adam Hochschild, who is also a prominent author, have two granddaughters. Photo: Daphne White

And, though many Berkeleyans feared that five years of repeat visits to Louisiana would cause Hochschild to go native, exactly the opposite has happened: Hochschild moves right into Berkeley mode when she returns from her field work. “Berkeley is my home,” she says. “It has allowed me to exhale, to take more chances, be more creative.” And so, Hochschild now tells anyone who will listen that Berkeley needs to go back to its activist heyday to respond to the Trump phenomenon. “We need to move on from despair and recover in the spirit of the ’60s,” she said at the Hillside Club.

Hochschild said that in these troubled times progressives need to engage in “some peaceful and massive demonstrations. I think we do need to fight. I want to see a lot of ’60s activism out there.” Progressives need to fight — and file massive lawsuits — against any policies of a Trump administration that would hurt the environment, or civil rights, or women’s rights, or other progressive values and principles, she said. “We need a large vision, and we need to set up a loyal opposition.”

At the same time, she said, progressives should engage with individual Trump supporters and try to find areas where we are in agreement. “We need to stand up, assert our values, and have conversations. We need to reach out to Trump supporters who a mere eight years ago voted for Barack Obama. They aren’t so far away, and we can’t just hurl epithets at each other.”

Hochschild, in fact, is still in conversation with her ‘friends’ in Louisiana. In fact, she is about to embark on another trip to the Bayou, this time with her son David Hochschild, one of five members of the California Energy Commission. David has a background in solar energy and works to promote renewable energy for the state of California. Hochschild’s radical plan is to put David together with Mike Schaff, an ardent Tea Party member and Trump supporter, who is also a major character in Strangers.

Schaff’s house and community were basically destroyed when a 37-acre sinkhole opened up and swallowed up much of the neighborhood. Those houses that still stand, including Schaff’s, are filled with dangerous levels of methane gas. This oil industry disaster could have been prevented, she says, with better regulation by both state and federal agencies, yet Schaff is vehemently opposed to regulation. (Read Hochschild’s essay on Schaff.)

“I thought it would be good to get Mike together with my son,” Hochschild says. “You couldn’t find two more different people. But my idea is to get them in Mike’s boat and see whether people with such different political philosophies can find common ground on the environment.” Hochschild plans to be a silent witness in that boat, recording the conversation.

Hochschild refers those who are interested in embarking on a Left-Right dialogue of their own to a new website called LivingRoomConversations.org. This site was founded by Joan Blades, a co-founder of MoveOn.org, who also appeared with Hochschild at the Hillside Club. Living Room Conversations provides a format for people from opposite sides of a variety of issues to seek common ground. The group will be launching another site called MisMatch.org in the near future, so people with different views from different geographic areas can begin online conversations, also to seek common ground.   “I think we will be bigger and better” for having these conversations, Hochschild said.

Even though Hochschild is technically retired, she is already thinking about her next project. “I’m thinking of going where global warming is really hurting people, but where there is a culture that promotes the idea that global warming is a myth,” she said. “I would like to meet these people and see what they think.”