“It’s probably going to take more people dying, or losing their homes and getting displaced, before people realize this situation is not going to go away”

Living in the California utopia has always involved danger as well as sun-kissed pleasure: wildfires, droughts, and floods were here long before humans arrived. 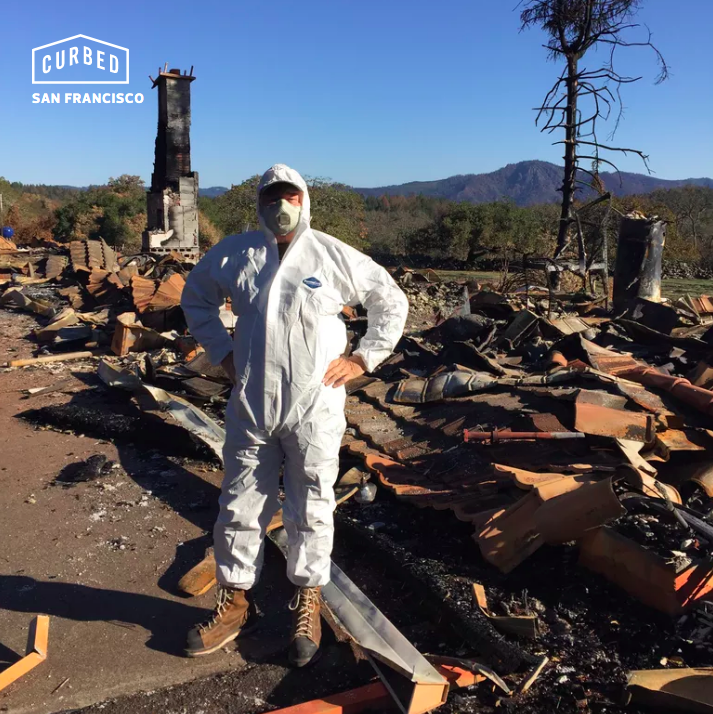 Pete Parkinson, former chief planner of Sonoma County, and his house that burned down in the 2017 Nuns Fire.
Photo courtesy of Pete Parkinson.

Living in the California utopia has always involved danger as well as sun-kissed pleasure: wildfires, droughts, and floods were here long before humans arrived. Extreme weather, earthquakes, and a relative shortage of water also came with the territory. But as the state’s population has exploded—and global warming intensified—these conditions have only gotten worse.

So as we enter a new decade, it might be time to admit that we Californians are actually living in a state of denial.

Consider that 2018 was the worst year for wildfires in the state’s history: There were a total of 6,136 fires, over 1 million acres burned, and nearly 100 people died. Consider that even though areas at the edge of wilderness—called Wildland-Urban Interface (WUI)—are the most vulnerable to wildfires, California added 1.1 million housing units to such areas between 1990 and 2010. As a result, fully 32 percent of all California housing units, and 30 percent of the population, are located in high or extremely high fire risk areas.

To make matters worse, the 2017 Tubbs Fire, which torched Coffey Park in Santa Rosa, demonstrated that even suburban areas on flat terrain are not immune. And the Kincaid Fire of 2019 raised the specter that Coffey Park residents would have to evacuate a second time.

“The short-term prognosis is kind of bleak,” says Bruce Cain, director of the Bill Lane Center for the American West at Stanford University. “It’s probably going to take more people dying, or losing their homes and getting displaced, before people realize this situation is not going to go away. Nobody wants to be inconvenienced, and nobody wants to pay the price. But we can’t continue to live the way we are living now.”

The state has passed some important fire prevention legislation and regulations over the past few years, creating extremely ambitious goals for the electric grid and the transportation sectors, said Cain. There have also been changes to the state’s building codes, to make houses more fire resistant, and changes related to local planning and zoning requirements. Just this fall, Gov. Gavin Newsom signed 22 new bills related to catastrophic wildfire prevention and response.

“So we feel like we have given at church,” says Cain. “We feel like we have made our sacrifice. But the fact is, until the state government actually puts in emergency provisions—not voluntary ones—until we declare a state of wildfire emergency like we did with the drought, people won’t take the fire threat seriously.” 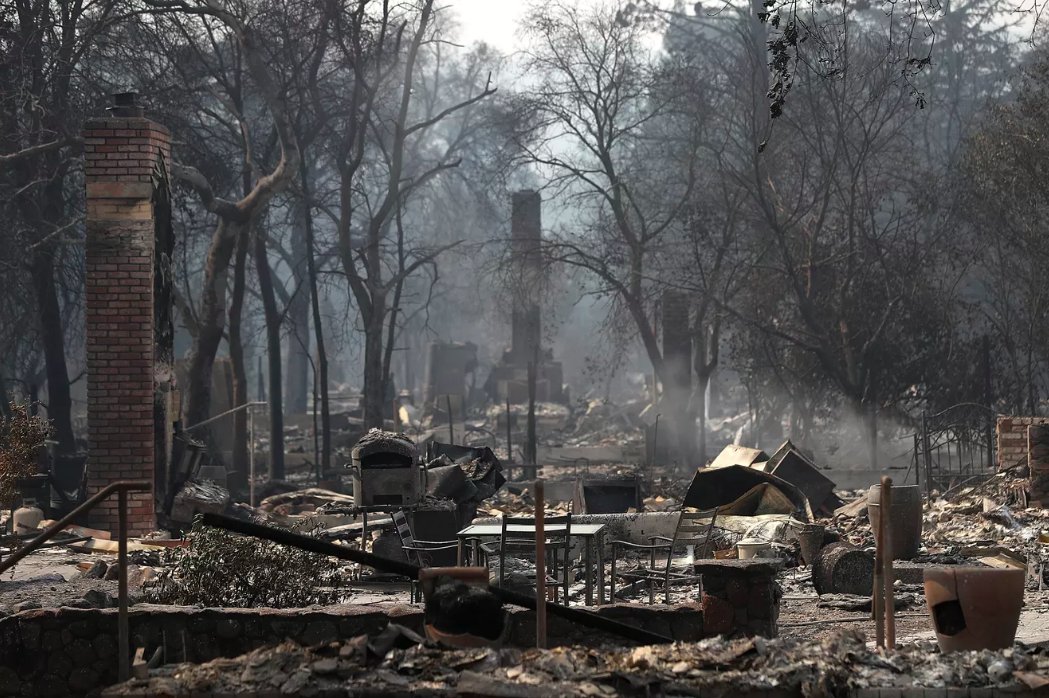 A view of the remains of multiple homes that were destroyed by the Nuns Fire in Glen Ellen.
Photo by Justin Sullivan/Getty Images.

Pete Parkinson, who was director of planning in Sonoma County until he retired in 2013, had worked as a planner in different parts of the state for 35 years. “Disasters have followed me everywhere I go,” he said. He had experience with the Loma Prieta earthquake, as well as floods, landslides, and other disasters. Then, in 2017, the disaster became personal: His house in Sonoma was incinerated in the Nuns Fire.

“Since my house was built in the sixties, I was always worried about losing it to an earthquake,” he said. “I certainly never thought it would burn down. And I never imagined the possibility of a catastrophic wildfire that would level entire parts of our neighborhood.”

Parkinson said his house was not in the woods, and had plenty of defensible space around it. But even though his neighborhood was in a zone labeled “moderate” for fire danger by CalFire, 92 of 135 houses there burned down.

“What we have is not a fire problem, but a house ignition problem,” says Stephen Pyne, author of Fire: A Brief History. “What propels these fires is not a wave of flames, but wind-borne embers.” The wildfires that have plagued California in the past decade have gone “feral,” says Pyne: no ordinary fires, they actually create their own weather systems, like tornadoes. They grow so quickly and move so fast, sometimes jumping over eight-lane highways and even bridges, that they are impossible to control in the early stages.

Pyne says that California was “built to burn, and built to burn explosively” with high-voltage transmission lines criss-crossing the state and millions of houses built at the edge of forests. These WUI communities think of themselves as rural, he says, but they are actually “little cities.” And people who choose to live in these forested areas—because housing prices are lower, or because they love the beauty—believe that “they don’t need infrastructure because they are out in the country, and they don’t want regulation. They want to get away from all that.”

Parkinson said that in the three decades he worked as a planner in California, he could not think of one example where decision-makers had denied a project or reduced project density based on fire hazards. In fact, some projects in notoriously fire-prone areas are still getting approved, even after the horrendous fires of the last few years.

A case in point is the Tejon Ranch north of Los Angeles, where a 19,000-home development was approved last December. The state has deemed this a “high” and “very high” fire hazard zone, and there have been 31 wildfires within five miles of the development in the past 50 years, including four within the boundaries of the planned development.

When these kinds of projects come up, the question asked is not “is this a good place for development” but rather, “if you are going to do this, what are the measures you need to take” to mitigate the fire hazards, said Parkinson. The assumption is that “mitigation” is enough to stand in the way of a tornado. But in reality, “the fire hazards in some areas of our state are simply too great to allow additional residential development,” he says.

Any kind of building restrictions inevitably come up against private property rights, and the state’s housing shortage and homelessness problems. Cities and counties want to build more housing, and they also get revenue from development projects, so they have an incentive to approve them.

As a result, a state bill which would have greatly increased regulations around new development in high fire risk areas—but not prohibit them outright—did not manage to pass the Senate in the last session. Senate Bill 182, introduced by State Sen. Hannah-Beth Jackson, is expected to come up again in 2020. “California’s residents and homes remain under threat of wildfire and we cannot continue with business as usual,” said Sen. Jackson in a press release. Whether this bill passes remains to be seen. 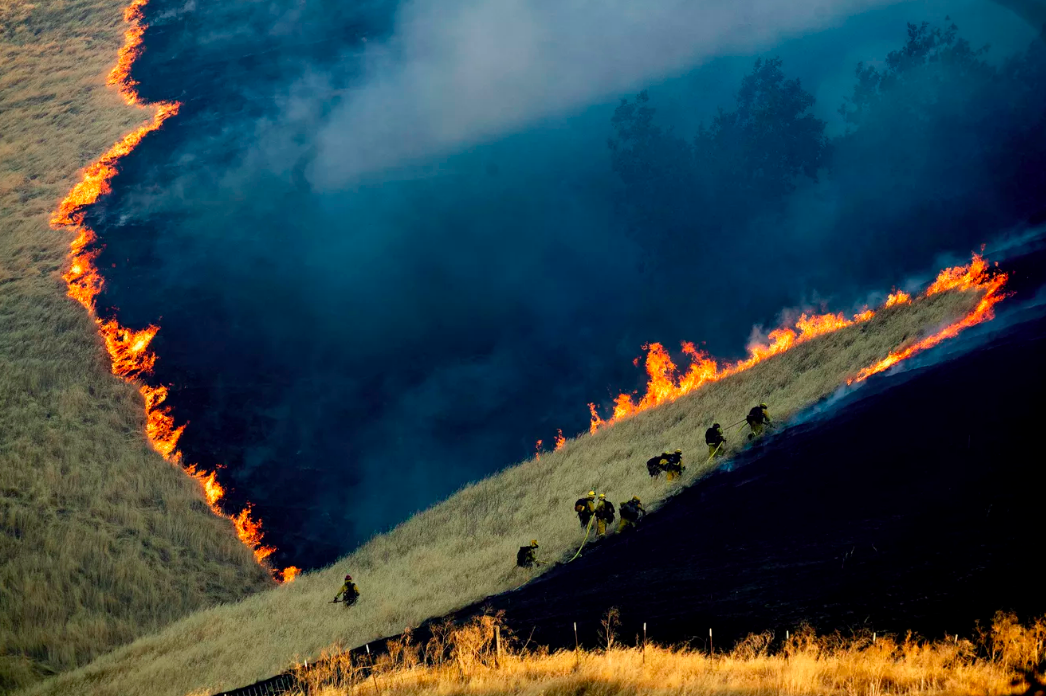 Firefighters battle the Marsh Fire near the town of Brentwood in Contra Costa County in August 2019.
Photo by AP Photo/Noah Berger.

In order to minimize wildfires, planners have to tackle the problem from many angles at once: build better infrastructure; require that new houses meet more stringent fire-resistant codes; enforce vegetation codes; create better escape routes; improve communications among first responders, and much more.

“Fire is a contagion problem, and it’s community-wide. You have to treat it like vaccination, not these piecemeal carrot-and-stick approaches,” said Pyne. “That is going to take a huge amount of financial and human capital.”

It’s been done before. In the nineteenth century, cities used to burn with some regularity, he said. So urban planners came up with new building codes, less flammable materials, sprinkler systems, fire detectors and more. Railroads were also a major cause of fire a hundred years ago. “If we could take on the railroad industry, we can take on the current problems,” he said.

Some changes are already happening. New houses are being built to a higher fire-resistant standard, and with more defensible space around them. Some homeowners are starting to “harden” their homes, and put in more fire-resistant landscaping. (A more comprehensive story on preparing for wildfires is here.)

Then there are technological fixes, such as new fire hazard maps, and new apps that will help fire departments map wind and fire directions during catastrophic events, and even come up with the best evacuation routes for individual areas within a fire zone.

And there are collective actions, such as creating better zoning, better evacuation plans and more coordinated community-level planning, according to Sarah Anderson of UC Santa Barbara’s Bren School. Some of these activities are beginning to take place, especially in the North Bay areas that have faced recent fires. Communities are organizing themselves into Fire Safe Councils, for example, in order to undertake hazardous-fuel-reduction projects, Community Wildfire Protection Planning, and homeowner fire safety training.

“We are still at the stage where we want to believe that someone else can fix this, like the fire department or the forest service or PG&E,” she said. “But the truth is, it’s not somebody else: It’s us. Your community that lives in the wildland interface also has to take responsibility. That’s what this next decade will be about.”

Research shows, though, that enthusiasm tends to wane one to three years after a catastrophe occurs, said Anderson. The fact is, many people don’t want anything to change, even after experiencing a major catastrophe in their neighborhood.

“The Oakland Hills have had three major fires since 1906, including the 1991 fire,” says Scott McLean, deputy chief of communications for CalFire. “But nothing has changed structurally after any of those fires.”

The roads remain extremely narrow; people continue to park on both sides of the street, making it difficult for emergency vehicles to get through; and the density of houses is basically the same.“Can a major fire happen again in the Berkeley or Oakland Hills?” asks McLean. “Of course it can.”

After the recent Santa Rosa fires, some planners saw an opportunity to rebuild the neighborhood in “safer, more sustainable ways,” said Thomas Jacobson, a professor at Sonoma State University. The town of Paradise had similar discussions. “But I heard someone in Paradise say, ‘I am tired of hearing about all these opportunities. This is my life: it’s not an ‘opportunity’.” And so the building goes on. 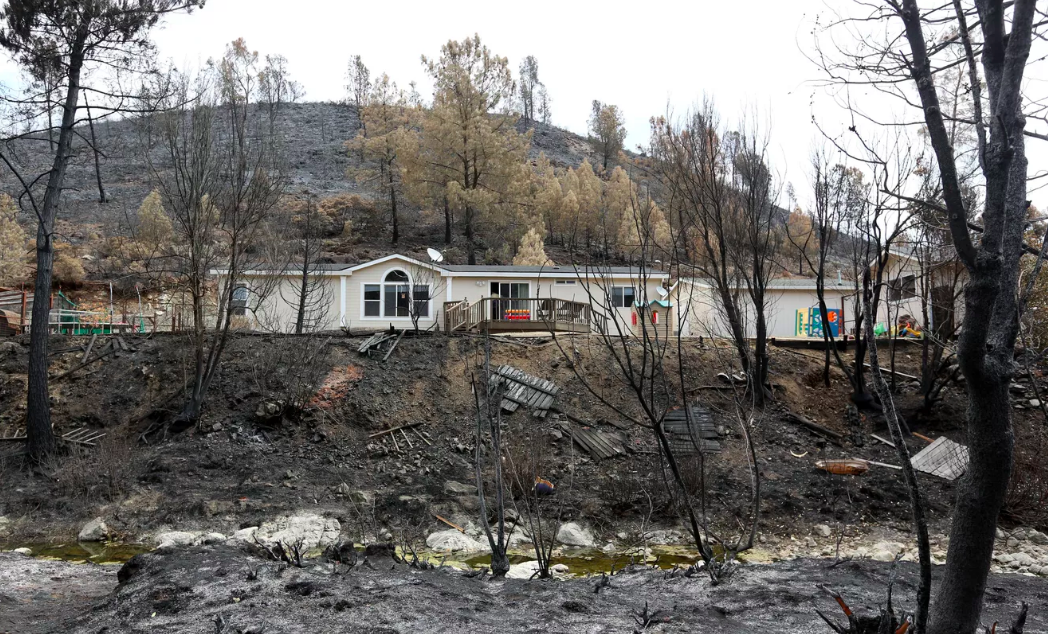 Defensible space surrounding this Pope Valley house helped firefighters defend and save it from the flames of the 2014 Butts Fire.
Photo by AP Photo/Rich Pedroncelli.

In 2018, a year after his house burned down, Parkinson wrote an article called “We came, we planned, we were wrong” for Northern News. “We need to rethink our approach to development in fire-prone areas and wildfire hazard mitigation,” he wrote. “As planners and as local government decision makers, we thought we had adequately anticipated the hazards and had planned accordingly. We were wrong. As emergency responders … we trained and exercised for scenarios we thought were ‘worst case.’ We were wrong about that, too.”

Evacuation plans are essential, but events rarely unfold according to plan, wrote Parkinson. “Relying on a hardened structure to protect whole communities in a known fire-prone area is the height of hubris and callousness,” he added. “In Santa Rosa’s Fountaingrove neighborhood, homes that were built to WUI standards appeared to fare no better than those built before those standards … The lesson is that we cannot engineer our way out of every hazard.”

And still, with a surfeit of optimism, Parkinson and his wife rebuilt their Sonoma home to the new standards on the same “stunning” lot where their original house burned down. They moved in a couple of weeks ago.

The California dream lives on.