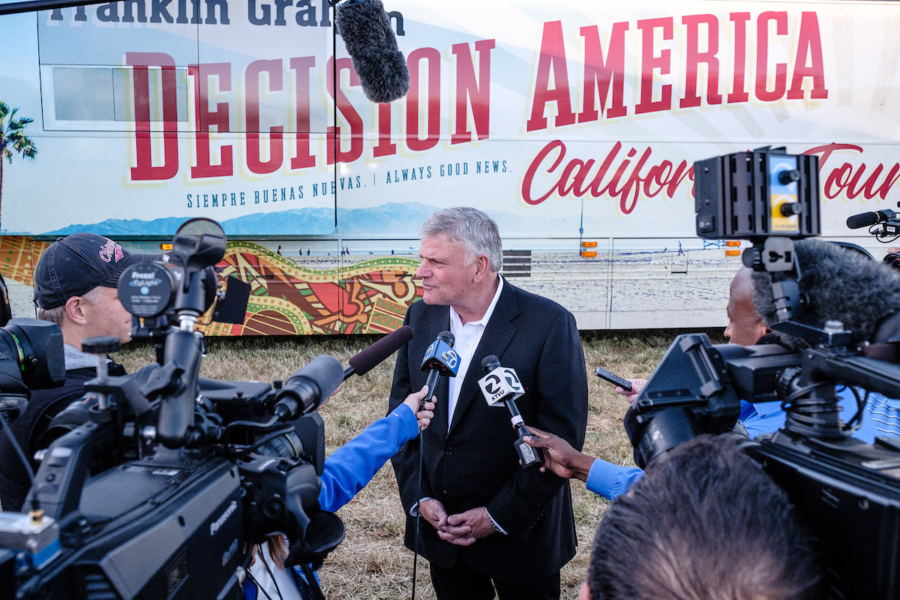 Franklin Graham answers questions for the press backstage before addressing his audience at a rally in Cesar Chavez Park on June 1, 2018. Photo: Pete Rosos

Turnout was lower than anticipated. Ahead of the event, a Graham spokesperson had said they were expecting 2,000-4,000 people. The rally started slowly, with only a few hundred people scattered throughout the large expanse of Cesar Chavez Park, and, by the end, a Berkeley police officer estimated that there were 1,500 people in attendance.

“I came to Berkeley because everyone on my staff said, ‘Don’t go to Berkeley’,” Graham told a small scrum of reporters at a scheduled, and tightly controlled, press conference before the rally kicked off.

“They said, ‘nobody will listen to you, it’s the home of progressivism’.” 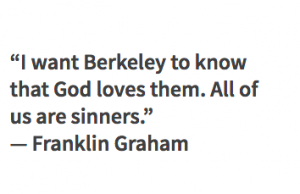 Graham has previously declared that “progressives” are “godless,” so this was coded language. “I want Berkeley to know that God loves them. All of us are sinners,” he said.

Graham — an outspoken Trump supporter who has made disparaging remarks about Islam, is anti same-sex marriage and abortion — was wearing a crisp white shirt, no tie, and a black jacket, his signature style. He displayed the charisma of a successful preacher and asked for each reporter’s name, shaking hands with all.

When asked about his Islamophobic views, he responded, “I want Muslims and gays to know God loves them.”

In what was perhaps the only unscripted moment of the press conference, Graham admitted that “only two churches in Berkeley supported us. In a lot of communities, we have 100-200 churches supporting us.” Is that why you call Berkeley “godforsaken?” a reporter asked. “God has not forsaken Berkeley,” Graham said. “A lot of people in Berkeley are searching, and they don’t know what they are searching for.”

Berkeleyside asked Graham whether he would consider using some money from his large Samaritan’s Purse charity to help the homeless in Berkeley. He responded that Samaritan’s Purse is a Christian charity, and he would consider a request if it came from a Christian organization. “This is my first time in Berkeley,” he said. “There is homelessness everywhere.” 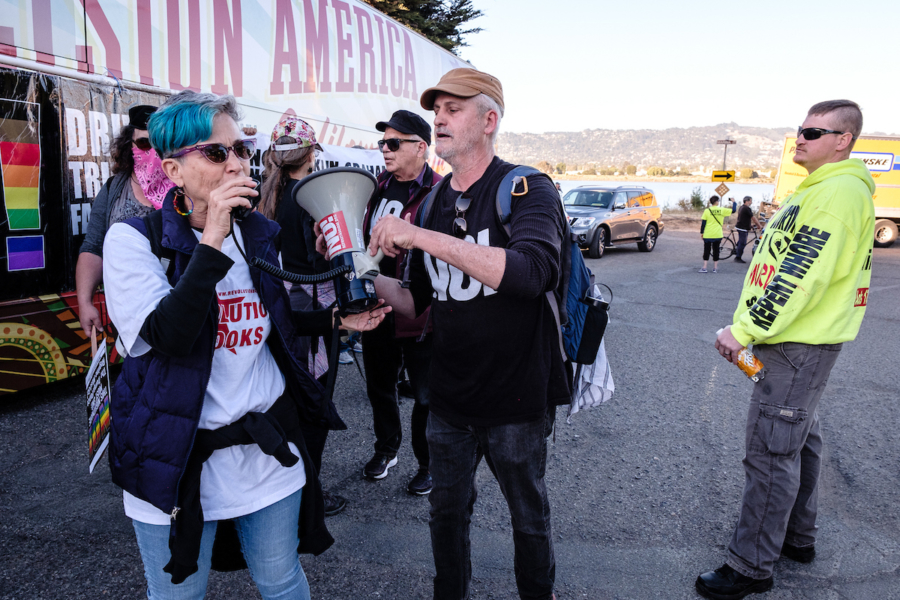 Protesters from Refuse Fascism argue with rally-goers on the periphery of the rally. Photo: Pete Rosos 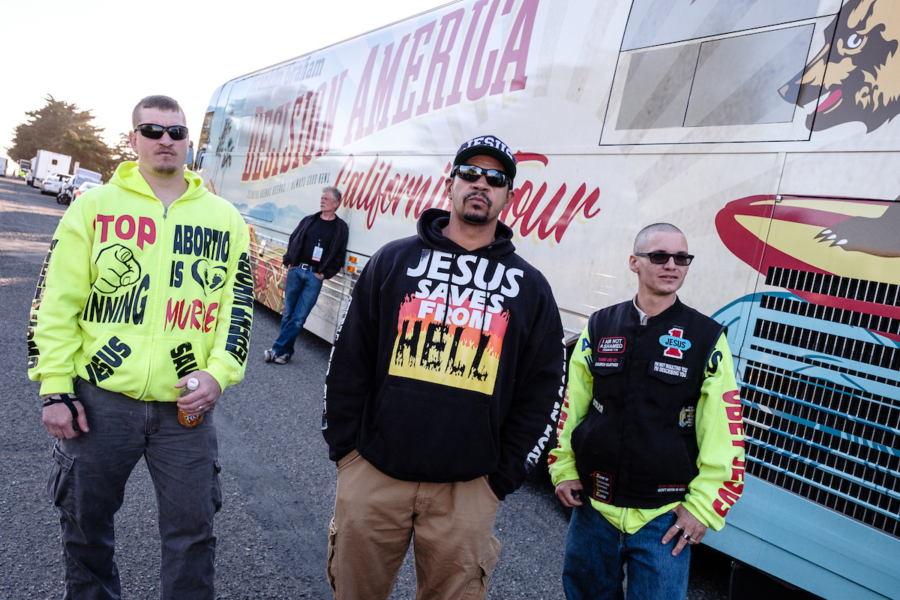 There had been speculation as to whether demonstrators would confront Graham, but no significant protest materialized. About 20 protesters organized by Refuse Facism did come and chant — “No hate! No fear! Queer folk are welcome here!” —  but they were hidden from rally attendees by one of Graham’s buses. It made for a good photo op, but the protesters were in effect shouting for the TV cameras and one lone heckler. A few Berkeley police officers stood chatting next to their motorcycles, observing the scene.

The rally-goers themselves made for a diverse group: there were many Asian and African-American evangelicals, along with white evangelicals. And there were people of all ages: very few young children, but some teens and millennials, as well as a preponderance of  middle-aged people and seniors.

Attendees came from Richmond, Alameda, San Lorenzo, Concord and further afield. Of the two dozen or so people interviewed by Berkeleyside, none were from Berkeley.

The program started at 7 p.m. with an opening act, and then Christian singer Jeremy Camp performed for half an hour, further warming up the crowd. Graham came on stage at 8 p.m., and, while he often talks for 45 minutes or more, he ended the Berkeley sermon after about 30 minutes. 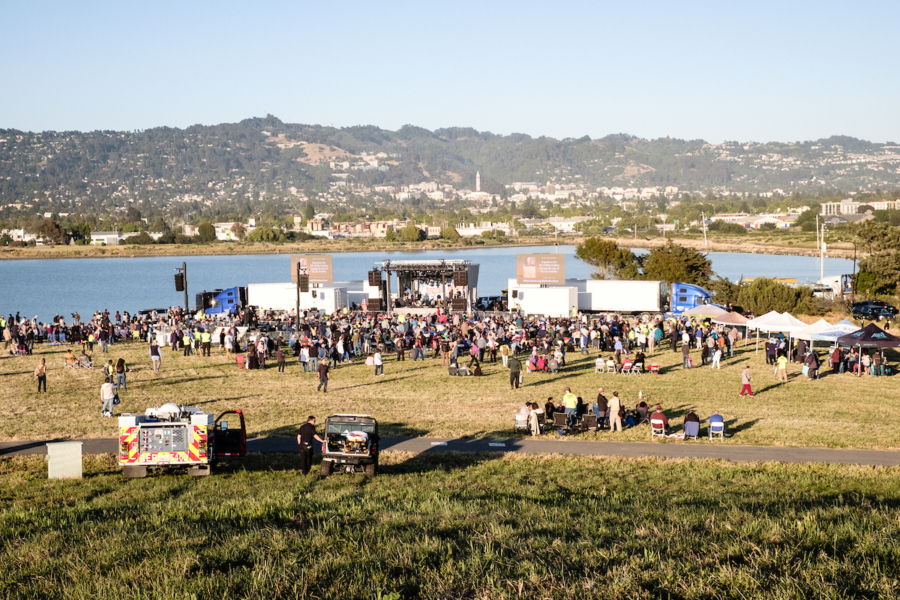 Scene of the Decision America rally in Berkeley with the city in the background. A BPD officer estimated the crowd at 1,500 people. Photo: Pete Rosos 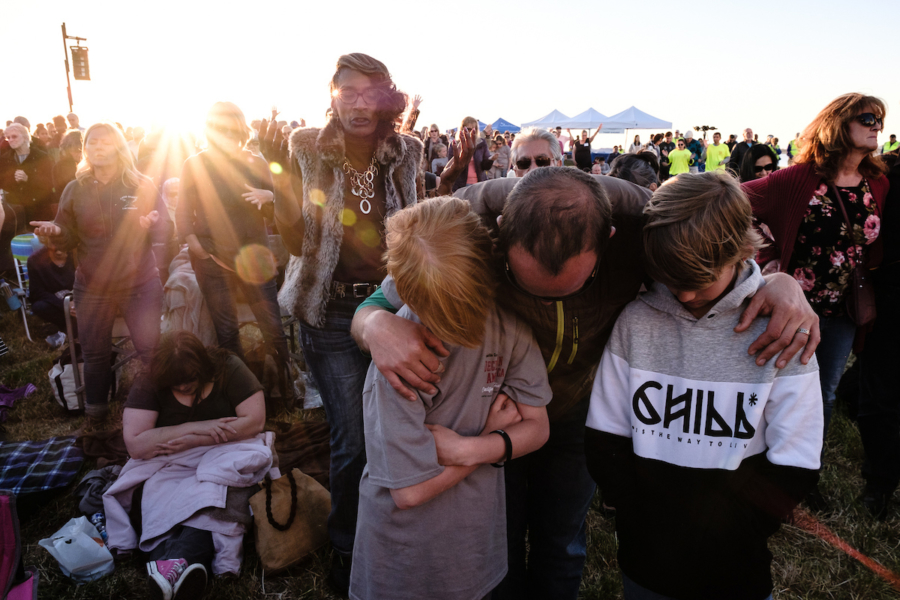 The audience bow their heads in prayer, some silently, some audibly. Photo: Pete Rosos

The sermon was not as political as it has been elsewhere: Graham did the usual prayer for our political leaders (including Rep. Nancy Pelosi and Sen. Kamala Harris), but then stuck mostly to Christian themes. He did not ask Berkeley rally-goers to vote for evangelical candidates.

The only time Graham provoked clapping during the sermon was when he raised the issue of abortion. “Murder is a sin,” he said. “You say, ‘Franklin, we live in California. We lock those people up.’ Abortion. Abortion.” There was scattered applause.

Graham then told a lengthy story about a tearful journalist confessing her abortion to him at a San Antonio restaurant, and how he told her that if she would repeat a specific prayer after him she would be forgiven. She said the prayer, and she was forgiven. Graham then gave the crowd the same option: stand up, repeat a prayer after me, and you will be forgiven.

By 9 p.m., the crowd had left, the stage was being quickly and efficiently dismantled, and the rally dissipated, leaving nary a mark on “godless” Berkeley.

Trarina Jackson, Richmond: “I was born again as a teenager” 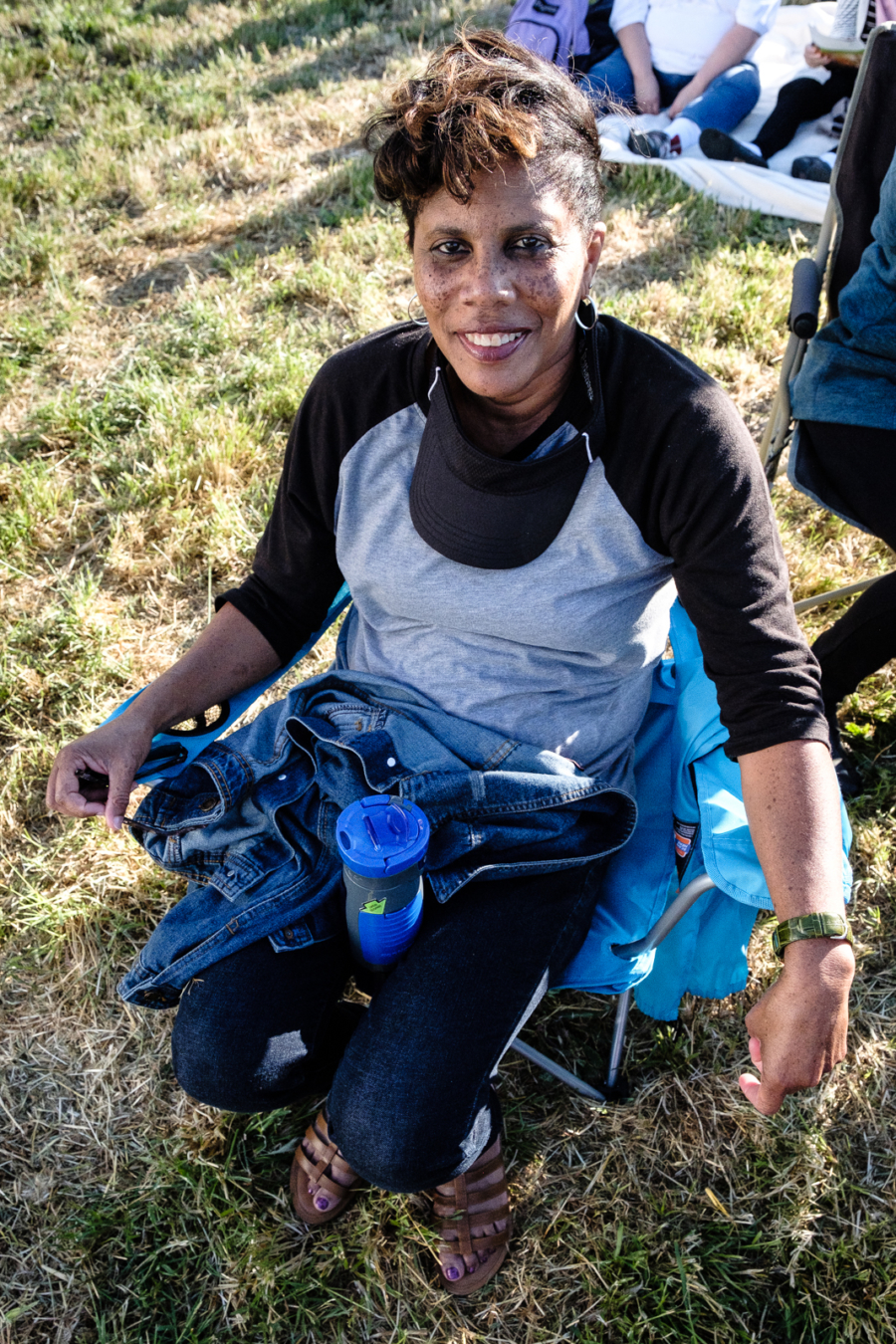 “I am an evangelical. I was born again as a teenager, when I was 16 years old. Being an evangelical means ministering to the lost for their salvation. In my own life, I was homeless for a while — my landlord took her place back. I wasn’t on the street, but I was living in my car. I had a job — I do in-home care for seniors. Then I met my new landlord [sitting next to her.] During all this time, Jesus kept me safe, He fed me.” 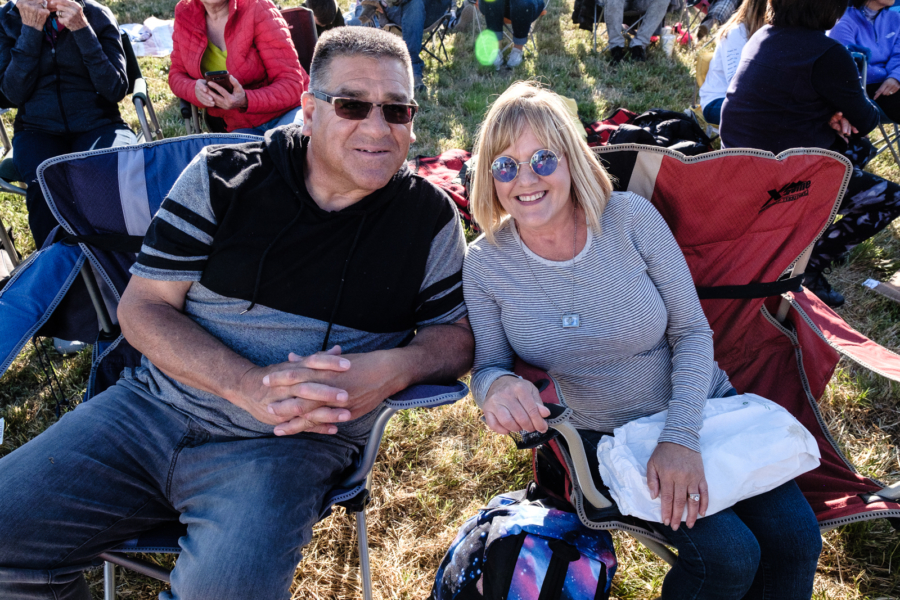 Cindy: “I have never seen Franklin in person before, but I’ve heard him on the radio and I’ve been on his website. Franklin gives me that hope, that inspiration, watching him and his family. Within the last four years, with everything I’ve been through, coming to know Christ has given me an understanding of the Lord. In the past four years, I’ve had lung cancer, I lost my mother, and I lost my job. I was diagnosed with bipolar disease, at the same time”

Cindy: “That’s when I was diagnosed. Me being at home, seeing his ministry on TV, and filling those Samaritan’s Purse Christmas boxes. It opened my heart, and that’s how I started with his ministry.”

Fred Garvey, Alameda: “I am a conservative activist” 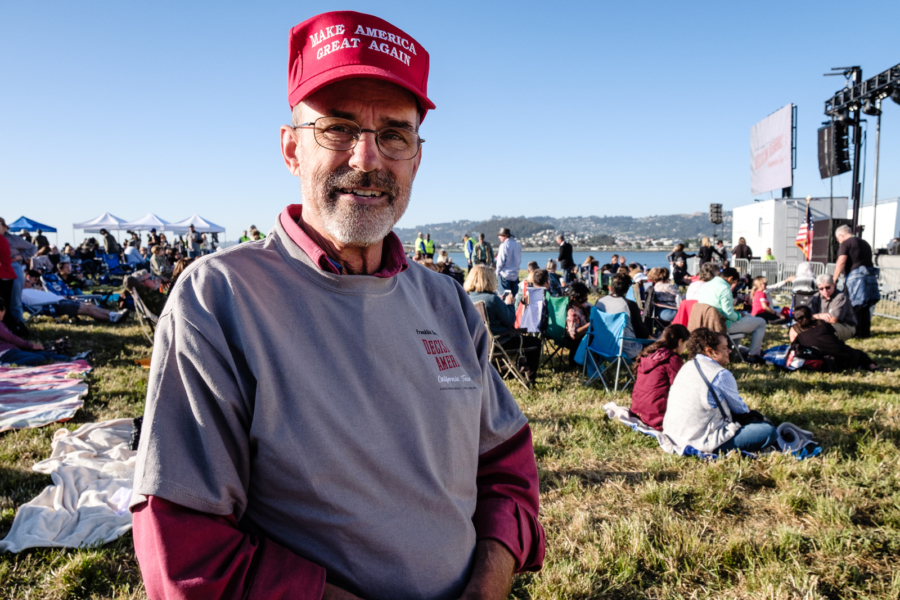 “I am originally from North Carolina, the same state as Franklin Graham. Franklin and I went to the same university, but I didn’t know him then. I drank a little more beer than he did, probably.

“I have been here 35 years, married to a local Alameda girl. I am a conservative activist, one of the original Berkeley Warriors from March 4, 2016. I am the “Free Speech Man,” and I head up the California Mass Resistance to restore traditional man-woman marriage.

“I saw the Billy Graham crusade at the Coliseum. Franklin Graham has taken a more conservative political activism. Billy Graham at the end of his life was focused on a series of laments. Franklin wants to do something about it. So here he is, in the belly of the beast.” 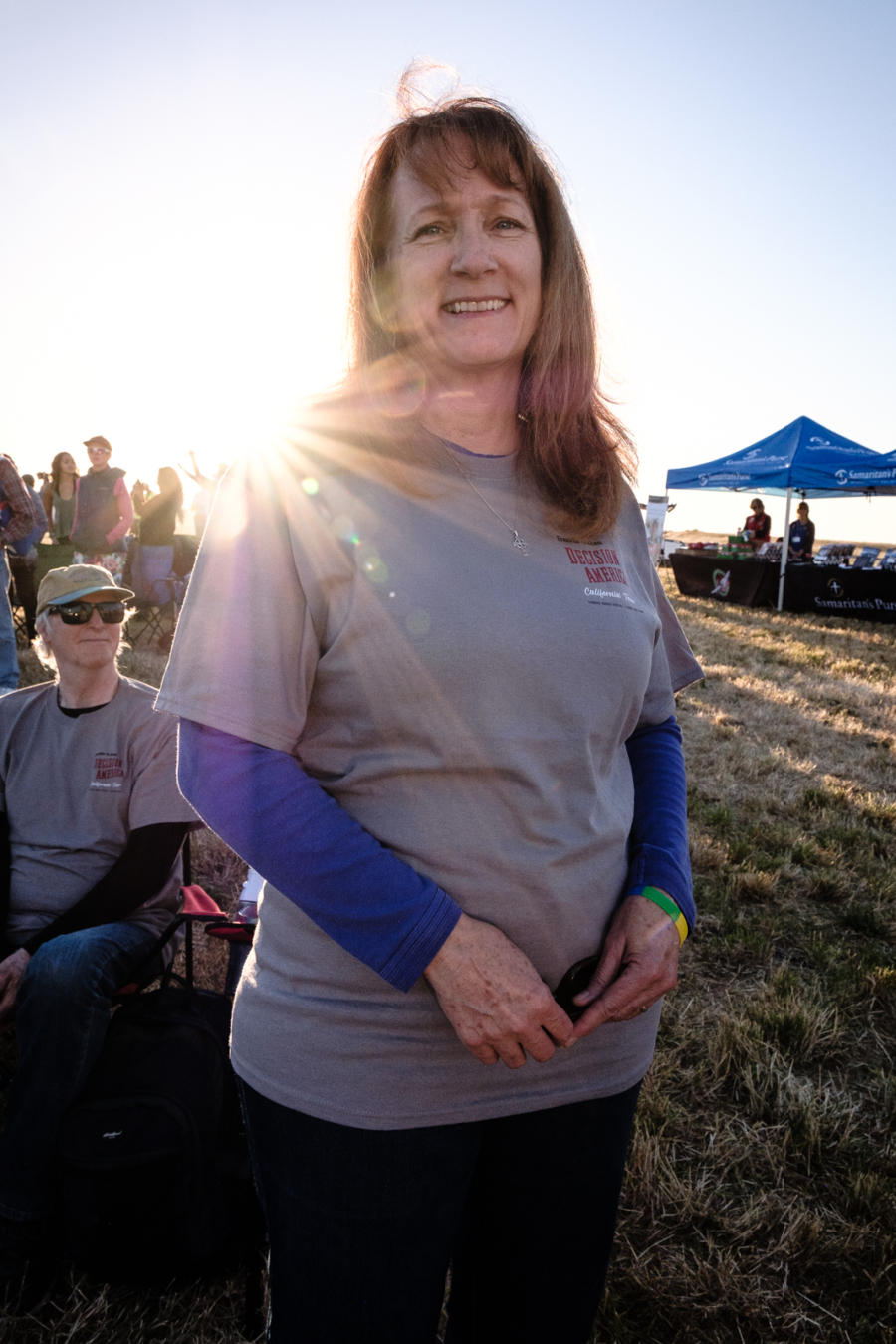 “I have never been to a Franklin Graham rally, but I’ve seen him on TV. I like that he has a boldness, he is bringing the gospel to California. We need hope in California. I believe he has a message of hope and peace and a lot of things are really hopeless right now. There is a lot of depression, hopelessness. He is bringing hope from a relationship with Jesus Christ.

“I think a lot of people in California are moving away from faith in Jesus Christ, and that’s where my hope and my joy lies. I come from a background of abuse and alcohol and drugs, and physical abuse. I was addicted to speed. Once I became a Christian, it brought some meaning into my life. I don’t see Jesus like I see my husband, but I talk to Him every day.”